Applied Meta Projects is an art & type direction studio based in Paris. Please get in touch for original illustrations, branding and custom typefaces 🡢 ✉ 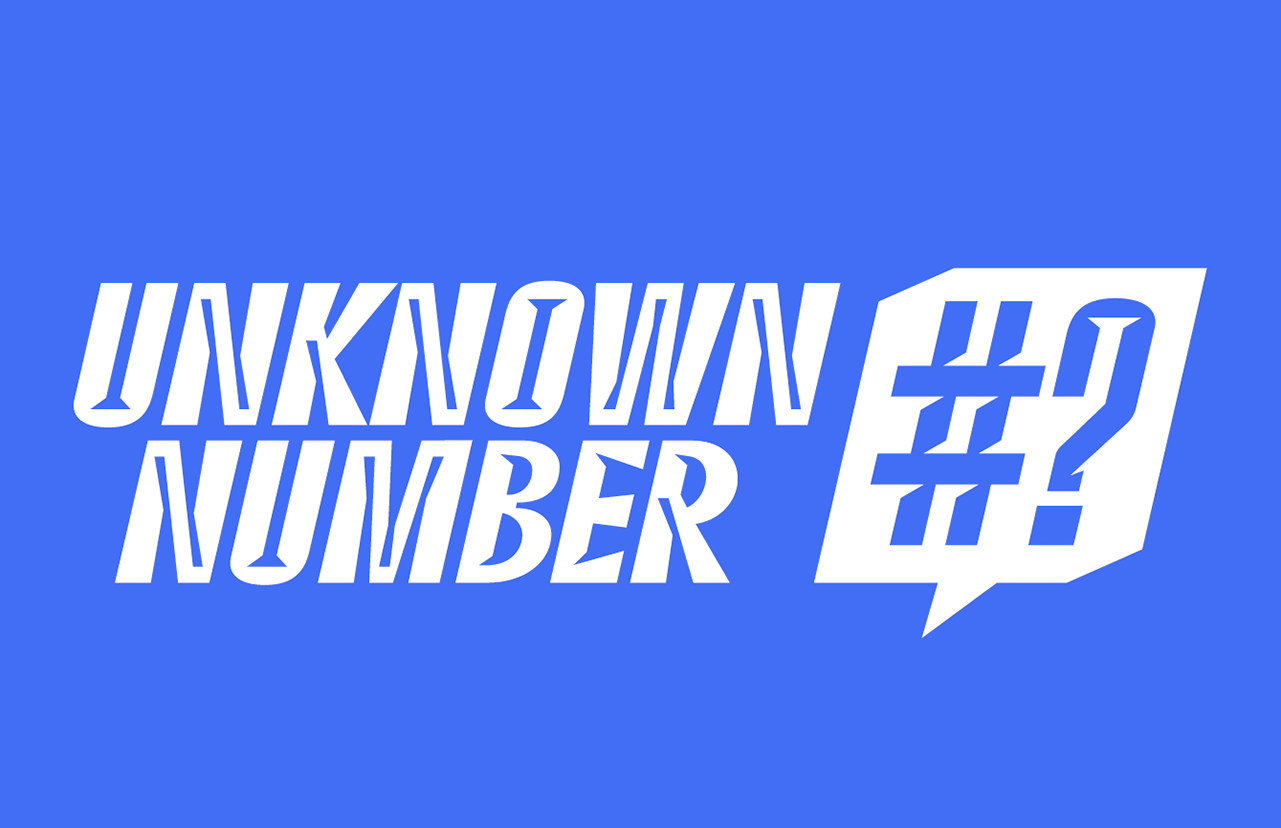 Unknown number is 'a first person talker', a new genre of videogames that you play by using your voice, created by Godolphin Games. Through a series of phone calls, you can help the environmental activists of the game to perform a daring heist taking place on an abandoned oil rig.

For this project, extensive art and type direction work was realized: from creating the main logotype to sub-brand logotypes, a custom typeface, icon design, character design and user interface. Unknown number was released on Steam the 21st September 2022. 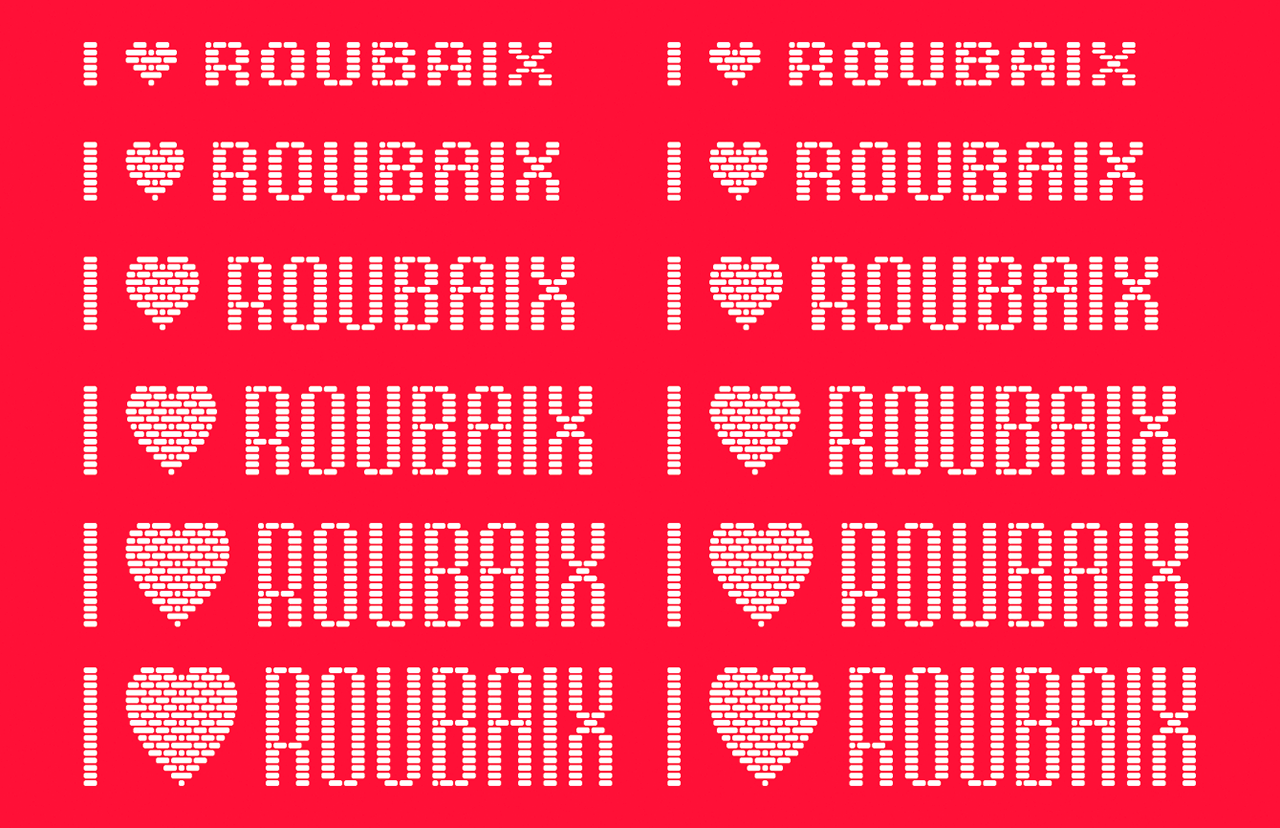 I Love Roubaix is a typeface inspired by the history of Roubaix, a city in the north of France. Roubaix knew a certain growth during the industrial revolution in the 19th century.

The I Love Roubaix typeface was developed at the request of the Roubaix Tourism Office and of the atelier Bien Vu. Its design is based on brick-shaped modules, as a reference to the predominant building method in the city. On its smaller optical sizes, its brick texture is reinforced with internal connections that recall the path of seams found in textile patterns. This way, this typeface creates a bridge between two main features of the city: brick architecture and textile industry. You can download "Roubaix Industrielle" (a libre/open-source version of the I love Roubaix typeface) on the Tunera Type Foundry. 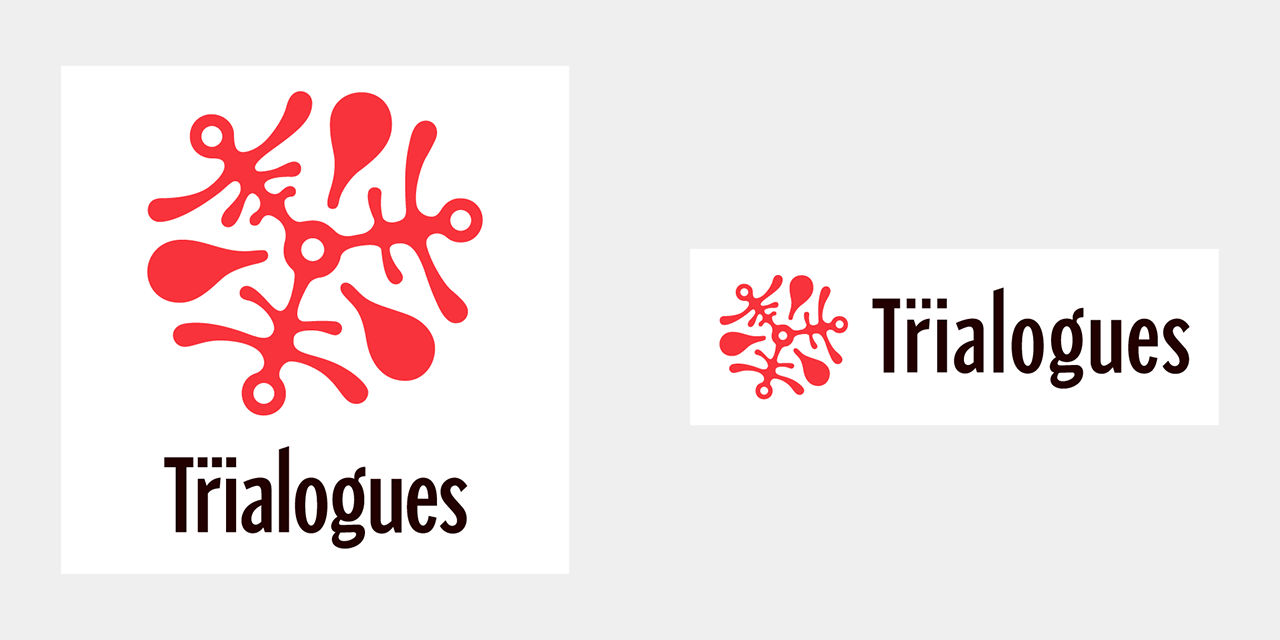 Trialogues is a research project by philosopher Pablo Pérez Navarro for the Center for Social Studies of the University of Coimbra. The logotype of the project is based on the notion of cultural exchange, where communication stems from the combination of shared points of view and not from individual declarations. 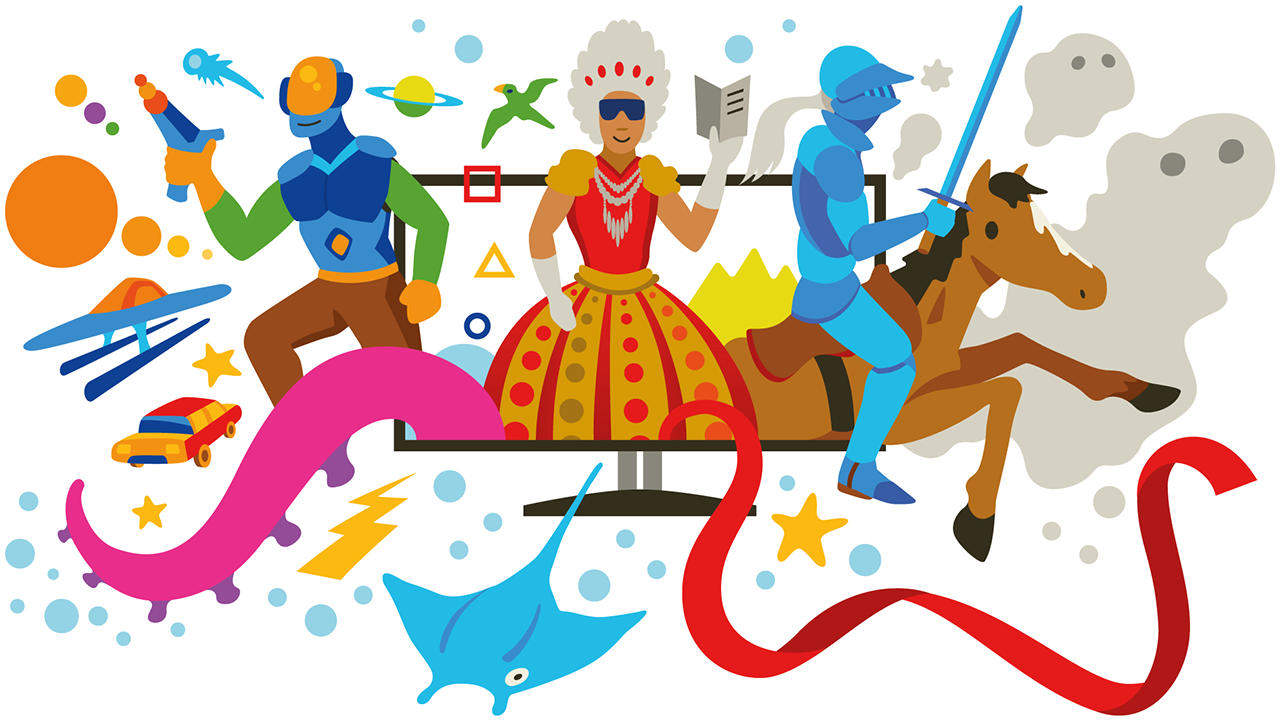 A series of illustrations about the rise of the Netflix company. The hero illustration features themes common to the streaming service (science-fiction, historical drama, medieval fantasy, nature documentaries), while secondary illustrations dwelve into the details of films and series financed by it. Objects and symbols refer to specific episodes of the series and act as easter eggs for devoted fans. 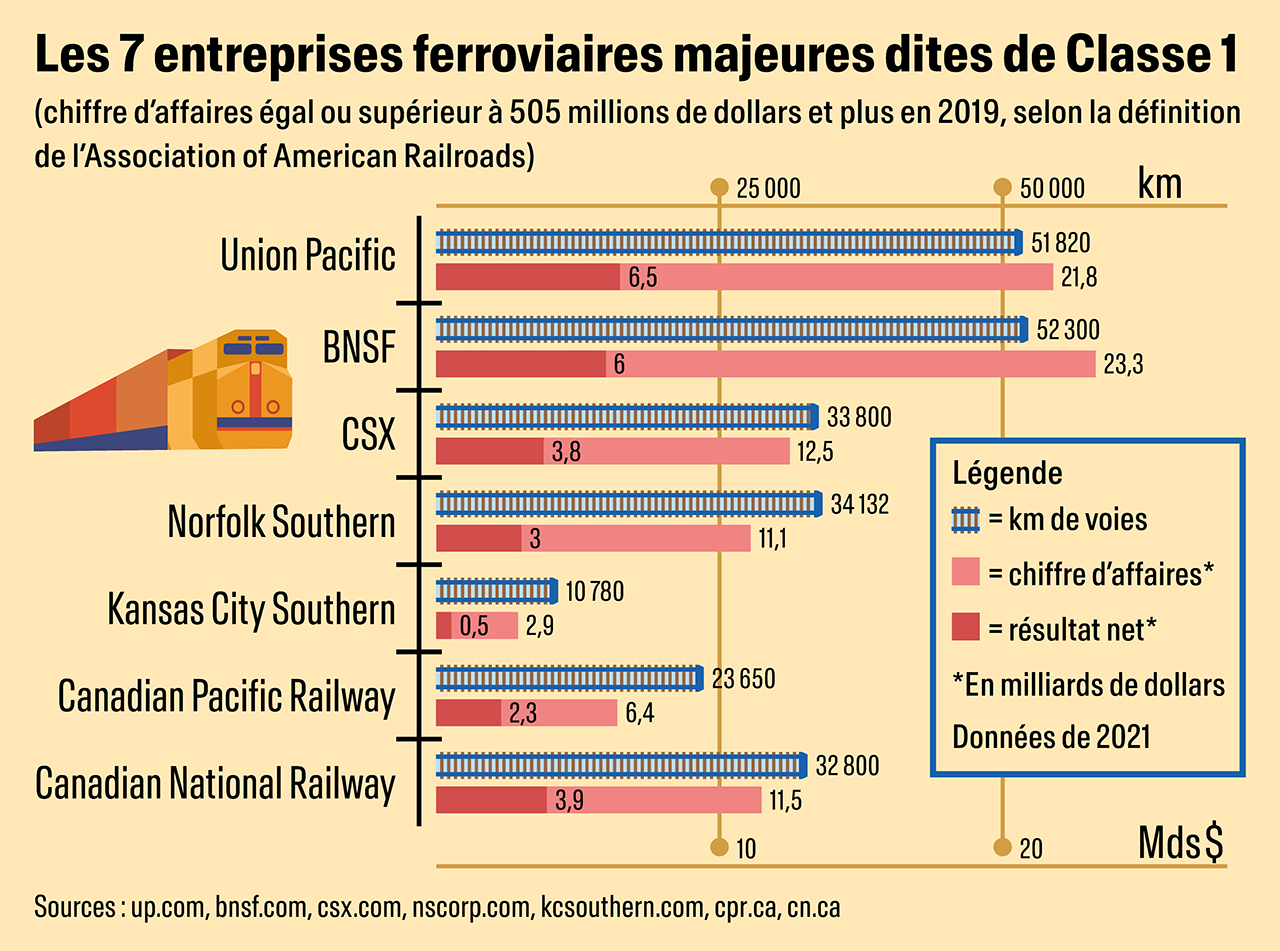 An infographic comparing the seven major freight train companies in the US. Total rail lenghts, total revenue and net revenue of these companies are assembled in a two-axis chart, so the space the infographic takes on the page is optimized. 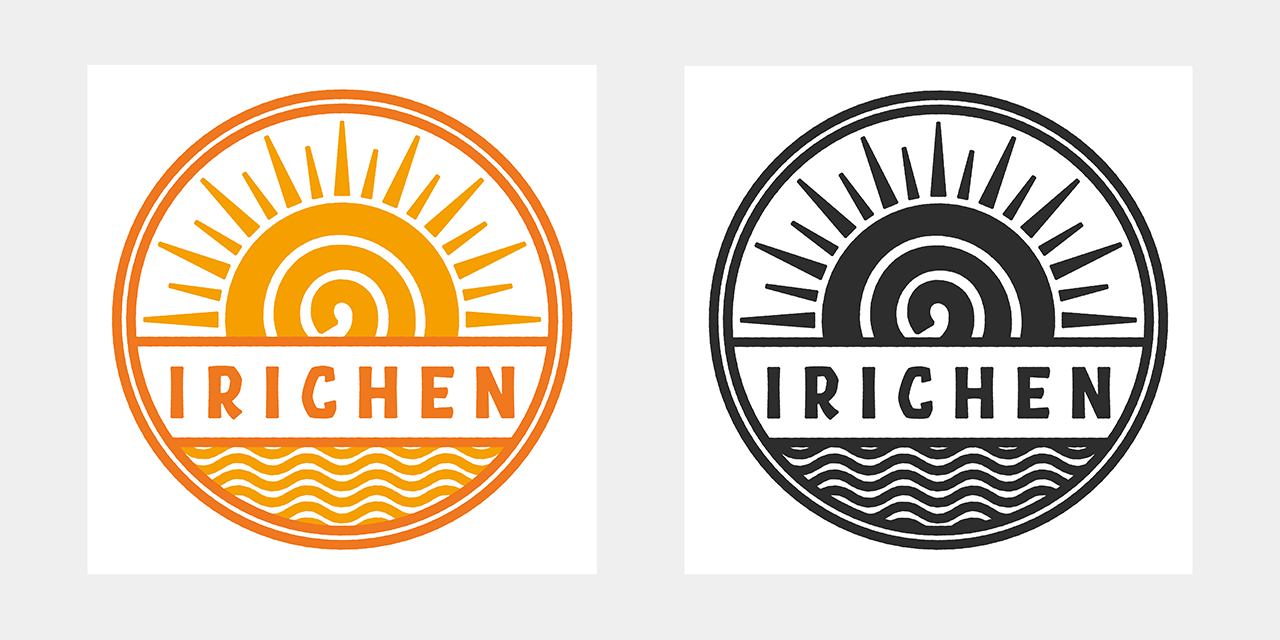 Irichen is a small company in El Hierro, Canary Islands, specialised in fresh organic produce and craftmanship. The name of the company refers to an ancient Canarian word for "wheat", as a way to signify fertility.

The client sought a circular logo that could be applied as an inked stamp to fruit crates and packaging. The symbols contained in it represent the sun (it's spiral shape refers to ancient engravings found on the Canary Islands) and a wavy sea. 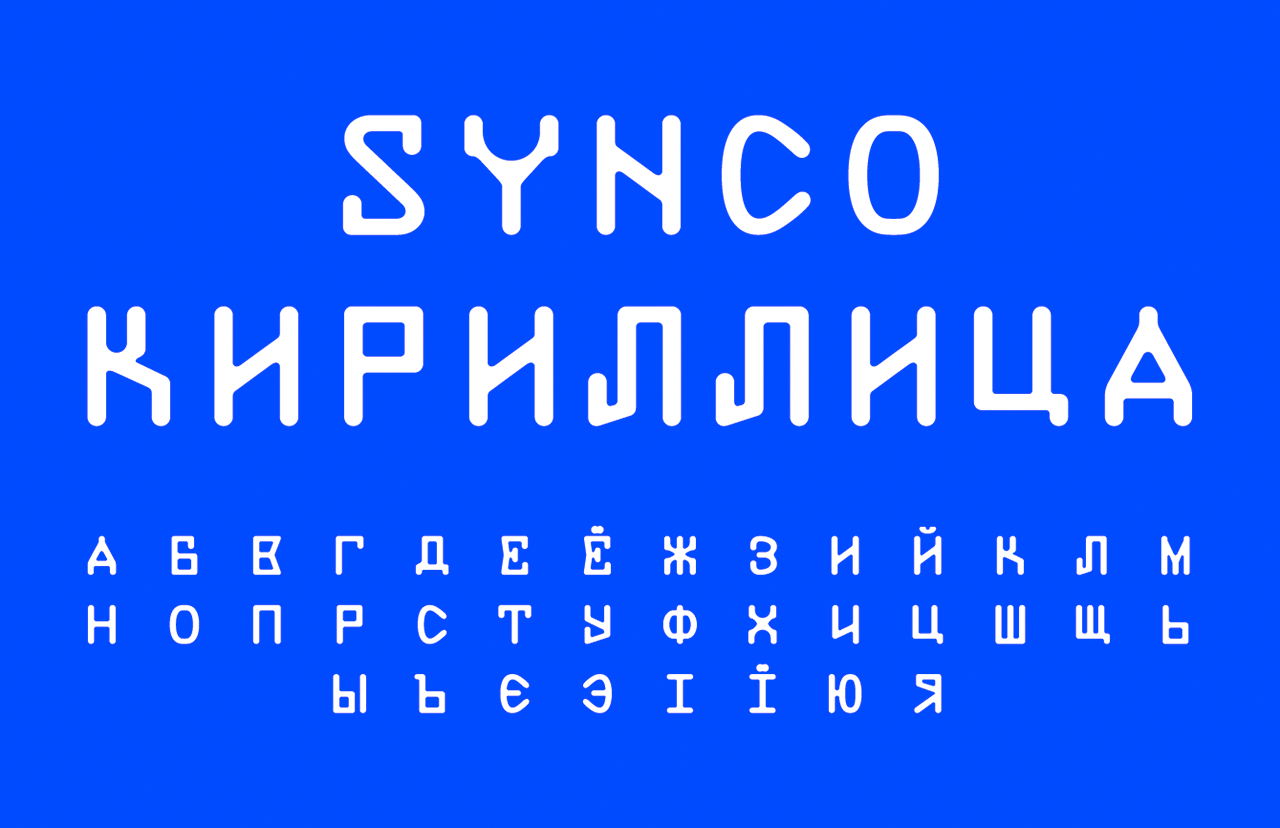 Synco Cyrillic
for a project initiated by Altiplano — 2021
Type design

Synco is a monospace typeface inspired by Viafont, a typeface designed by Harry L. Preble for Viatron OCR machines in 1969. Synco was imagined by Raphaël Verona for a London-based sportswear brand and released as open-source in 2020. In 2021, an update of the Synco font with a Cyrillic extension by Ariel Martín Pérez was released on the Altiplano website, you can download it here. 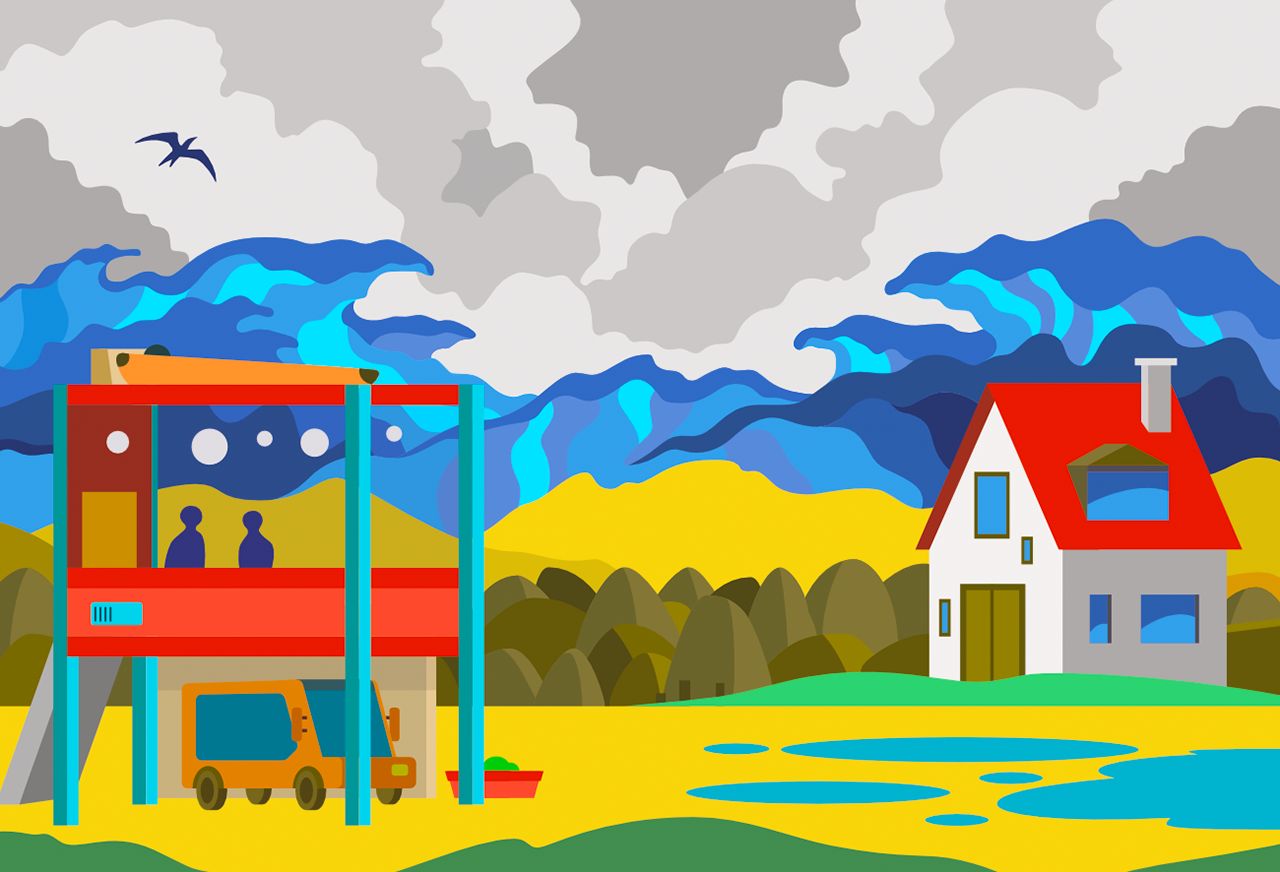 For this depiction of rising sea levels in the Atlantic due to climate change, a bold colour palette were used, as well as references to the local architecture and landscape of Normandy and to Hokusai's "The Great Wave off Kanagawa" print. The waves seem to float into mid-air as they loom over a disquiet scene, announcing impending doom. 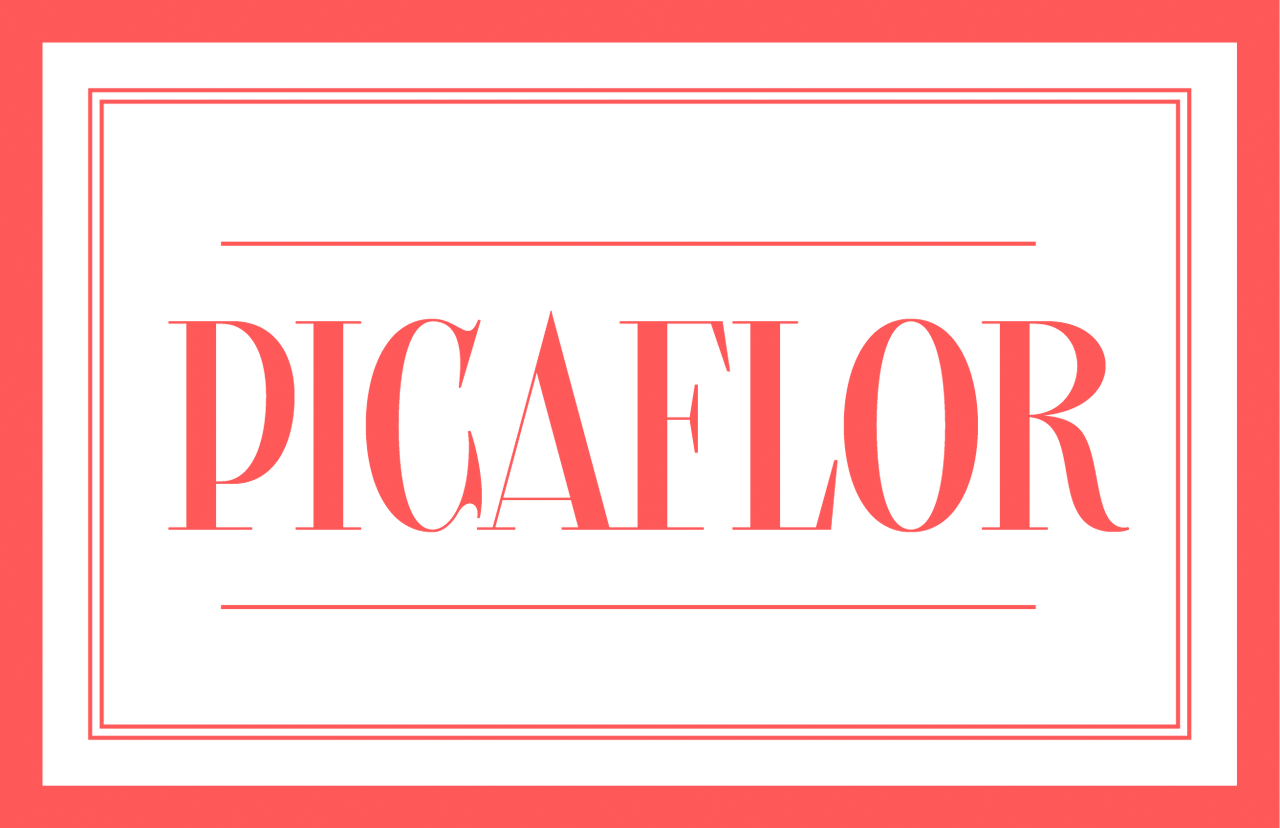 Picaflor is a hybrid display typeface with a French didone skeleton and many calligraphic surprises, inspired by the Spanish vernacular tradition. It comes in 7 optical sizes for your convenience (and a variable version). You can download Picaflor now for free on Tunera Type Foundry.

Picaflor was created for the 9th issue of Cercle magazine, which was dedicated to flowers. The typeface was used on the cover and interior pages of the magazine, designed by Cercle Studio. 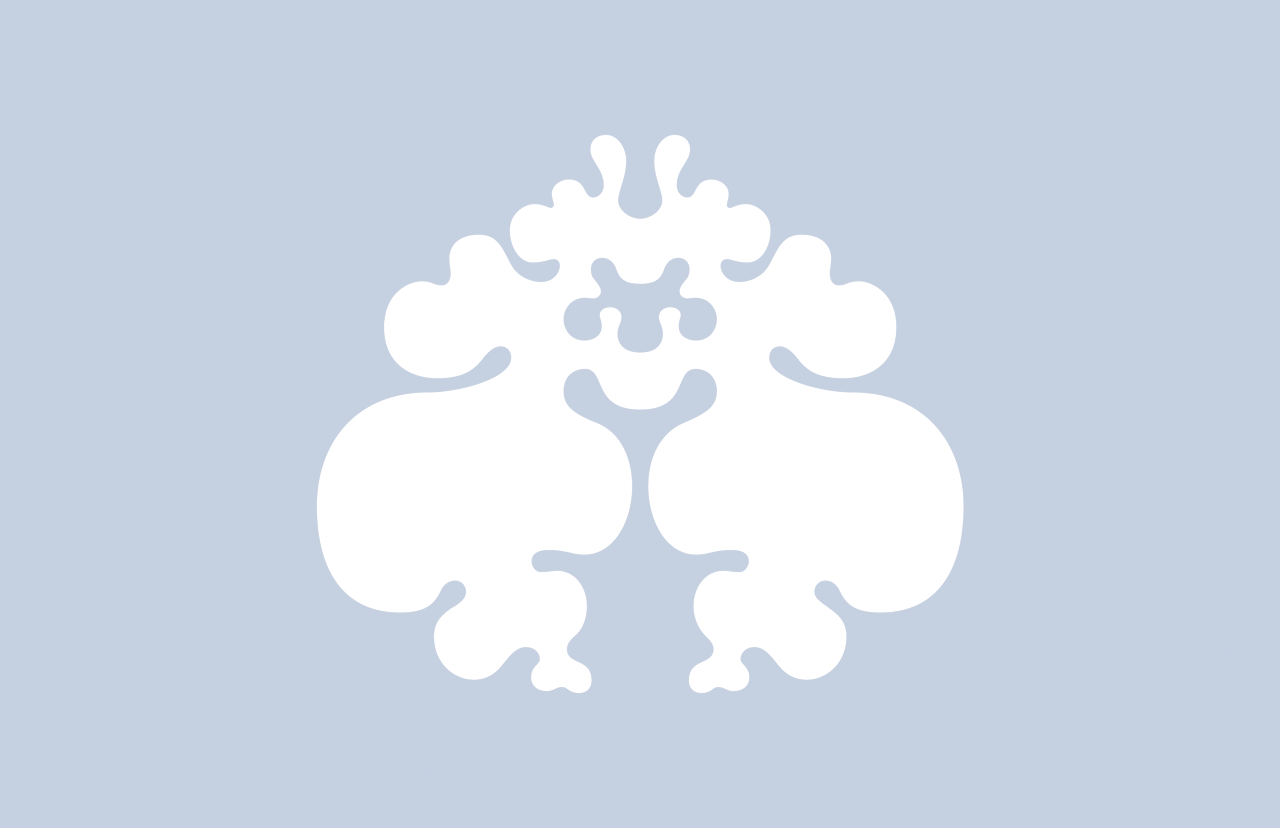 Applied Meta Projects contributed some glyphs to the Quarantype typeface, a collaborative open-source project initiated by fonderie.download during the first lockdown of 2020. For these characters, I took inspiration of some overlooked subcultures and movements, from baroque to grindcore through tribal tattoos. You can download the font files (published under the WTFPL licence) on the fonderie.download's website. 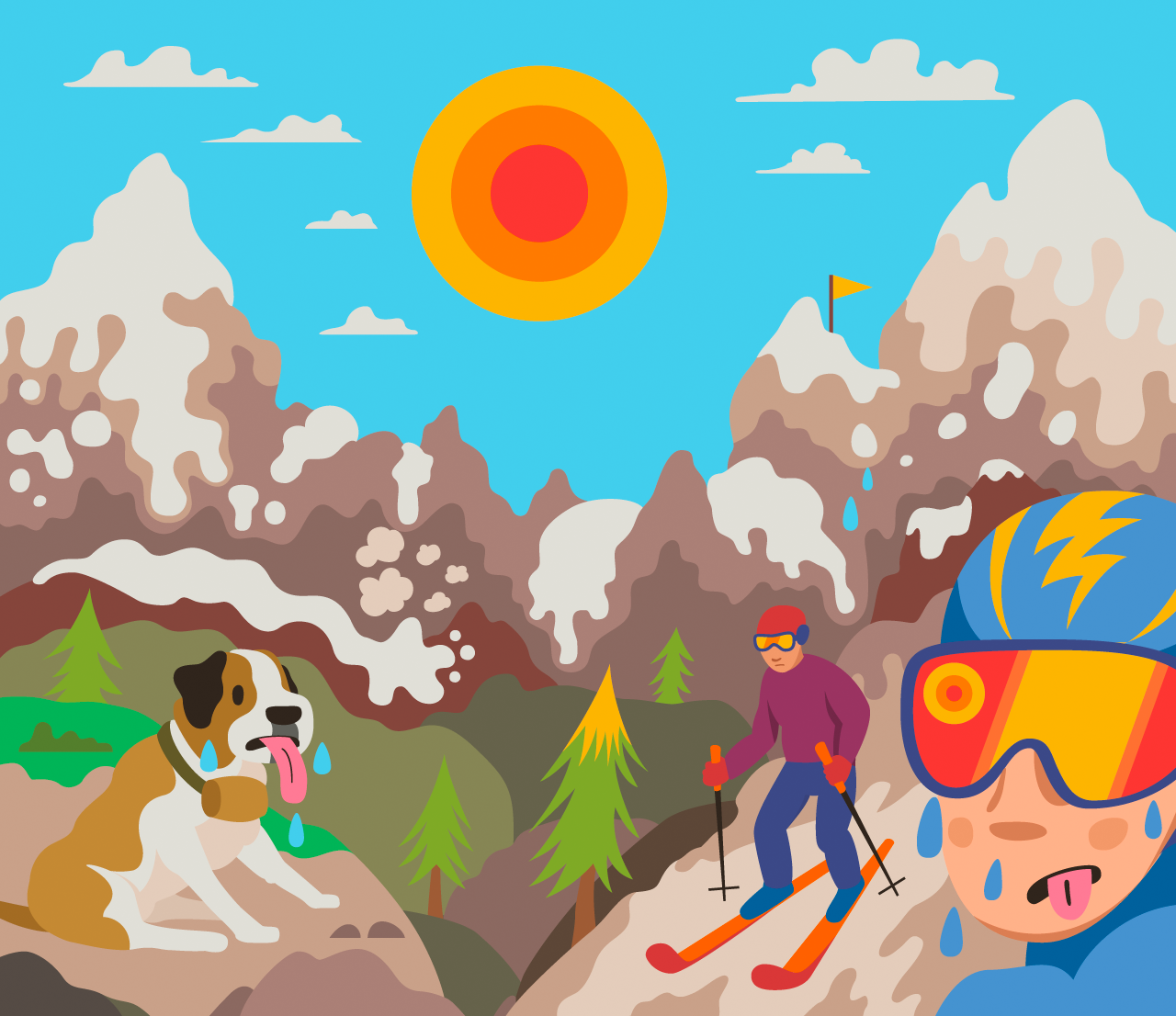 A series of illustrations about the effects of ski stations on climate change and viceversa. The original article also spoke about good practices that ski resorts can put into effect so skiing can become more sustainable. 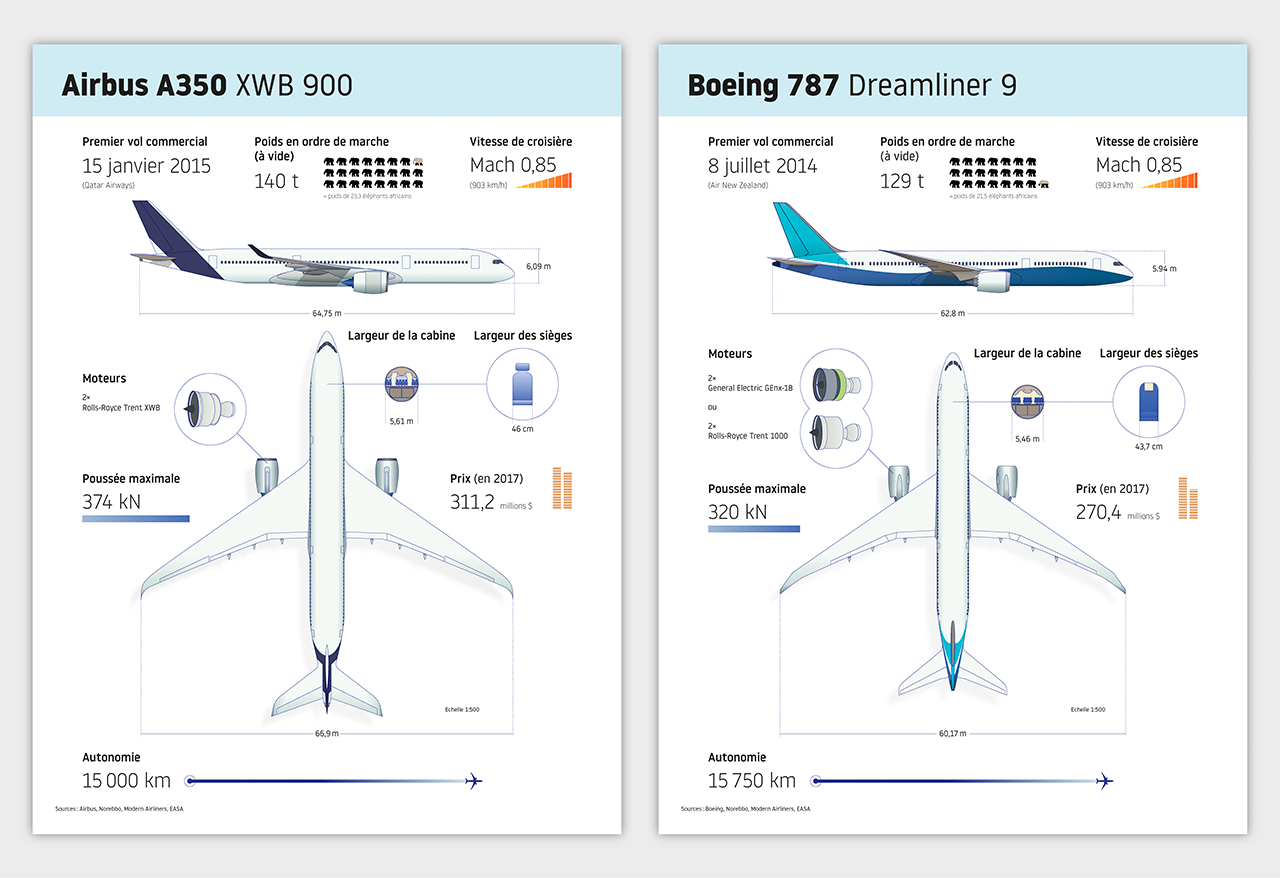 Airbus VS Boeing
for The Good Life magazine — 2018
Infographic

Side-by-side comparison infographic between two equivalent Airbus and Boeing planes. Data and pictures from many different sources were combined in order to reproduce the aspect of the planes and to present their main features.

Custom illustrated maps of the cities of Belgrade and Prague for Hey Mama!, the new magazine for the Mama Shelter hotel chain. The mission was to show the city highlights on a very detailed environment, with lots of characters, while clearly presenting the street grid and the location of the hotel within the city. 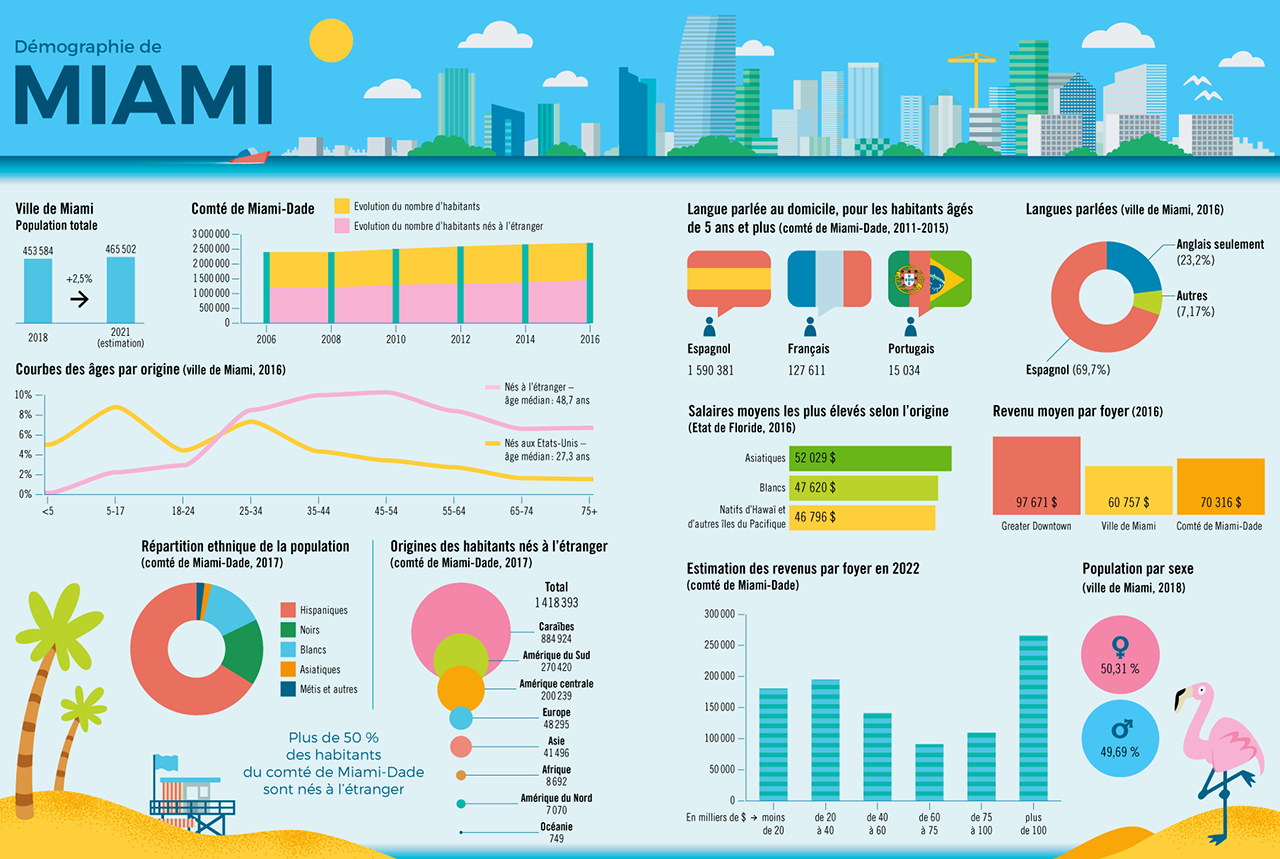 Demography of Miami
for The Good Life magazine — 2018
Infographic

A double-spread infographic about the demographics of the Miami county and Miami DAE. The colour palette, with its pink and yellow tones, was inspired by the city's culture. Featuring the ever-growing skyline, a beach cabins and the notoriously elusive pink flamingo.

CSS (CSC in French) is "a technology that can capture up to 90% of the carbon dioxide (CO2) emissions produced from the use of fossil fuels in electricity generation and industrial processes" (according to the CCSa). The illustration is partially inspired by a midcentury Petroleum Club mosaic by John Smith that was uncovered at the old Statler Hotel in Los Angeles in 2012.